Improve your ICP-OES Performance by using an Internal Standard

The use of an Internal Standard (IS) can significantly improve both the accuracy and precision of your ICP-OES analytical results. This post addresses:  how internal standards work, how to select an appropriate IS element, and how this methodology can be easily incorporated into your lab’s analytical procedures. 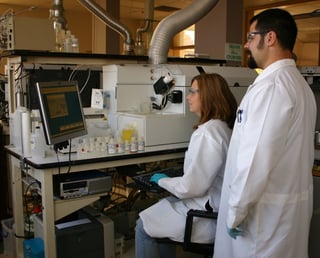 Internal Standards compensate for a variety of factors that can degrade analytical performance, including instrument drift, variations in sample introduction efficiencies, and sample matrix effects. Internal standards are added to all samples at exactly the same concentration level, including blanks, product samples, QC check samples, and calibration standards. Generally, an initial emission intensity is measured and saved for the internal standard element (often measured initially in the blank), and subsequent internal standard emission intensities are measured and then ratioed to the initial IS reading. The intensity readings for all elements are corrected by this ratio, according to the following formula:

In this manner, all intensity measurements are corrected for any changes in IS emission intensity from sample to sample. Instrument drift is minimized, and can help reduce the frequency of recalibration. If samples have varying viscosities or surface tension, such as in used oils, the IS will correct for differences in sample uptake and nebulization efficiency.  For samples such as metals that require digestion, variations in emission intensity due to sample matrix effects and plasma loading caused by varying levels of total dissolved solids will be corrected. In all cases, relative standard deviations will be reduced significantly and improve the precision of the analysis. 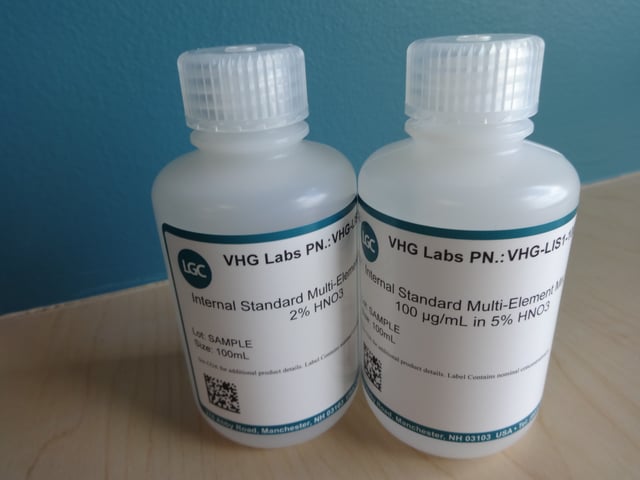 It is important to select the proper element for use as an internal standard. Otherwise, instrument performance can be degraded, rather than improved. The following considerations need to be taken into account.

Some of the most common internal standard elements include Y, Sc, Co, Pt, Au and Mn but your best choice depends on how well it meets the criteria above . Lastly, it is important that the IS element be measured simultaneously with the analyte elements. This means that the ICP-OES instrument is a simultaneous unit, rather than a sequential unit where one element is measured after another. Even in modern simultaneous systems, there can be slight time variations in how elements are read from the CID or CCD detectors. In that case, the analysis of the IS element and the analyte elements may not be completely simultaneous.  The use of an IS can still provide improved accuracy in cases where samples have varying viscosities or surface tension.


Once the ideal IS element is selected, it can be added to your samples and standards manually or via an automated technique. For samples that require digestion, such as metal alloys and geological samples, the manual addition of the IS prior to final dilution can be done easily and efficiently. The final concentration of the IS element should be in the 1-10 ppm range; the IS emission intensity should be sufficient that the measurement precision is good and within the linear range of the instrument. Generally, it is not required to calibrate for the IS element, nor is it necessary to know the exact concentration – just that it is added at exactly the same concentration to each blank, sample and standard. 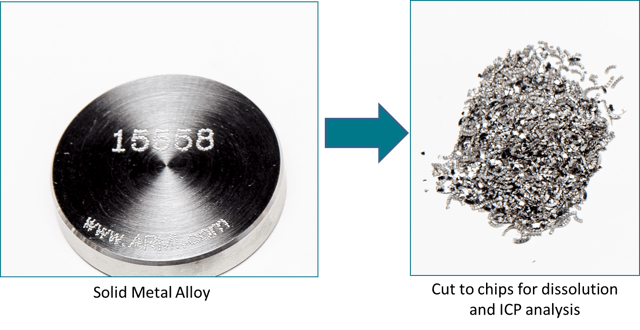 For liquid samples that either require dilution prior to nebulization or that can be further diluted, the use of an internal standard line mixing tee and chamber can automate the addition of the internal standard. This can be constructed in the lab with a multi-channel peristaltic pump, sample tubing of varying internal diameters, and a mixing chamber. Alternately, modular in-line kits are commercially available. For high volumes of samples such as used oils, this automated approach works very well. A large volume of IS can be prepared at the appropriate concentration in the lab, or pre-mixed solvents with internal standard already added are also commercially available. Either approach reduces the potential of operator error and saves time and labor.

There are two final notes of caution for internal standard use. First, make sure that your instrument software is capable of incorporating internal standard calculations and that the approach outlined above is appropriate to your instrument– check with your instrument vendor if you are not sure. Secondly, it is important to make sure that the IS element wavelength is free from background or spectral interferences, which would erroneously change the emission intensity of the IS. Once these requirements have been satisfied, get ready to improve your lab’s analytical performance and efficiency with the implementation of Internal Standard methodology!